A few weeks ago (was it weeks? Maybe months. Perhaps decades) I posted a very self-indulgent post about rediscovering my TTRPG past, and as I should have expected, that sent me spiraling into the rabbit hole of just…a lot.

It’s been my insulation. My security blanket. The source of a lot of sometimes blissful and always confusing fugue states.

I have been hesitant to dive into it all with the same fervor that once gripped me. I have a tendency to hyper fixate on these things. My dad used to describe it as my knack for going from 0 to 100 in a snap, and from what I understand, that can be exhausting for those around me, so I temper it as much as I can.

But it is difficult.

Behind this desk, where I’m typing this between meetings and configuring things, is a bookshelf, and the bottom shelf of that bookshelf is dedicated to years worth of gaming notebooks. I can tell you what is in each one. The black one with the slip cover once held a veritable TOME of gaming history for a single Mage: The Ascension character. The white one covered in sharpie ink that has turned blue over time holds my other Big Name Characters – a True Brujah, a Virtual Adept, a couple of Ratkin and Nuwisha, and my very first ever character, a Gangrel who was a bit of a mess.

What I’m saying is that for years, the White Wolf/World of Darkness games were a very big part of my life, so even more than usual, it would be so easy to gun it.

Lucky for me 5th Edition is pretty different from classic WoD, and that has given me something new to learn about. Slowly and in a fashion more befitting someone who has a massive org migration to complete in the coming weeks. 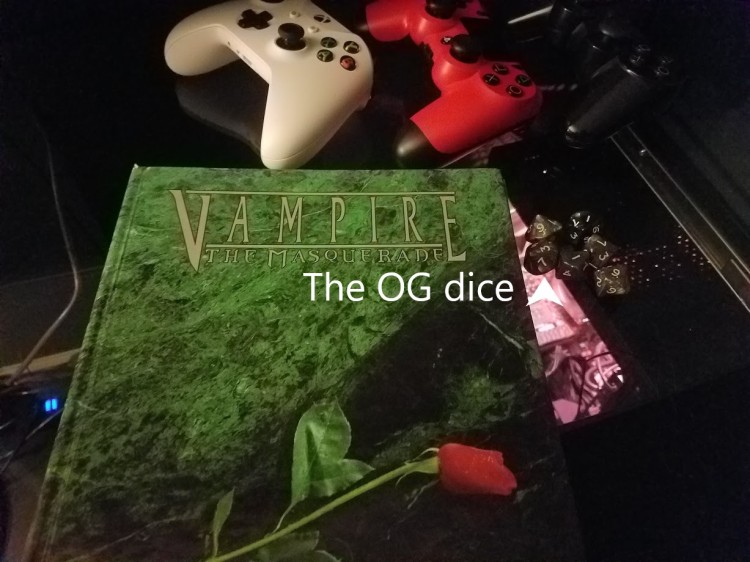 Sam, you say, 5th Edition has been out for a while. You are so slow on the uptake.

Reader, says I, there’s like…emotional baggage here, ok? Let me approach these things in my own time.

These are some of the things that have stuck out to me, in no particular order.

It’s a minor thing in itself, and obviously it had to change to fit the new game style, but…I miss that sweet border.

And I wasn’t the only one. Luckily Mr. Gone has got us covered, providing a 5th ed. sheet in that old school style.

Some Clans are missing (or have a face lift)

Where my Ravnos at? Not in 5th edition. Assamite, now the Banu HaQim don’t have a clan entry anymore, either. And as part of that, some of the Disciplines are different. Quietus is part of Thaumaturgy kind of I guess…so…magic assassins can be a thing.

There are Reasons for these absences in the lore, so it’s not like they were retconned, but I do feel their absence.

On the flip side of that, the Brujah clan feels more like what used to be the “True Brujah.” They seem to have returned to philosophical roots and a political anarchist movement, as opposed to being the Camarilla’s muscle.

Back in my day, when you had a roll of particular ridiculousness, the difficulty would be a number on the dice you were rolling, as well as a number of successes that you might need.

“I want to use Entropy to literally snap the strings of fate.”

“Ok. Difficulty is 10, and you will need a bajillion successes.”

NO LONGER! 6 or above is the magic range, and also critical rolls work different. No more rerolling 10s, a tactic that saved my skin multiple times.

There’s new dice, if the number thing isn’t for you. You get dots; you get ankhs; and you get SUPER ankhs. For newer players, that’s probably way easier.

I went whole games without thinking about hunger in my first chronicle. One of the things that I LOVE about the new system, especially watching LA By Night, is the emphasis on hunger. To be fair, a lot of that joy comes from Jason Carl’s amazing job personifying the characters’ Beasts. But also it should be a thing…vampires gotta eat, and what they eat is blood. That might take some getting used to for a neonate.

The other thing that stands out to me is the emphasis on PERSONAL humanity. It’s still pretty close to the Paths, I guess, but it feels so much more like the individual struggle that it should be.

Both of these really intrigue me.

Mechanics! The mechanics are different.

I used to go through my Willpower pretty fast to reduce difficulties. Now Willpower can be spent to reroll dice (and some other stuff).

I also spent a LOT of time playing Mage and less Vampire, but like hunger above, there was very little emphasis on monitoring my blood pool for most day-to-day games (not always, to be fair). That has changed, and again…I like that.

There is some support for the cringe-worthy stuff

It’s towards the end of the book, but there is a whole section about ways to handle some of the more (fandom old here, speaking) squicky stuff that may arise in a Vampire game. I’ve seen some mention of the issue of consent in TTRPG lately, and it’s something that should be discussed.

The new Vampire book provides insight into how to avoid it, as well as ways to make a safe space for your players. Kudos to the writers and editors for that.

This has been such a strange awakening (ha ha…Mage joke) for me, brought on by a global pandemic. A mix of nostalgia – and who doesn’t love that? – and something new simultaneously. It’s fun to see people discovering Vampire for the first time, as much as it is to see people reminisce about the original system.

It’s definitely served as a prime distraction, and I am grateful to all of those that put out content that I couldn’t have even dreamed of years ago when rolling my first (gray) 10 siders and drinking Dr. Pepper.

What a wild time to be alive.

Published by Polymath @ The Safin Hold

Hi. I live in Michigan, but I'm from Georgia, Pennsylvania, Seattle, and Arkansas (no, not an Army brat). I live with my husband and our cats, Cirilla and Dandelion. I'm a bonafide Salesforce Admin & Marketo Certified Expert. I like to craft. I like to cook. I like to eat and drink. I like to laugh. I like comic books and video games and sci-fi. I like a whole lot of things, and chances are, I will like you! I've also been a lot of things, like a 9-1-1 dispatcher, a teacher, and for a while I wrote obituaries. Right now I am a Salesforce Consultant! Who knew? Friends? View more posts