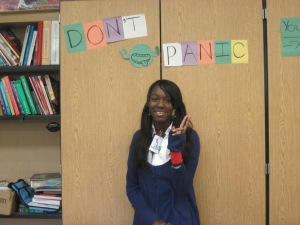 Today, Nala is graduating from high school, and I’m simultaneously amazed at how quickly the time has gone, sad that all of my babies are grown up, and immensely proud of her (and my other students walking across the stage).

Nala is the only student that has stayed in touch over the past 4 years, but she and I still have a lot to talk about.

When I first joined the WIT Diversity group, like other new members, I was asked to share a little bit about why diversity is important to me. This is why.

In the year I began teaching in Pine Bluff, the graduation rate for the school district was 66.7%. To put that in perspective, one district over, in the same county, the primarily white school had a graduation rate of 83.5%. We’re talking a school maybe 15 miles away.

I don’t know what it would be like to teach in a district with that kind of graduation rate. I’m sure it also has challenges…but I say that with a little bit of a bitter laugh because the challenges my students and I faced were many.

Over the summer, I received the keys to my classroom. I was so happy to have them; I felt like it was the start of something transformative. It had belonged to a veteran teacher who had left everything behind. She finished the last day of school and just left. As I was sorting through the years and years of homework and paper, a cockroach crawled over my hand. They love making nests in paper.

More than a handful of my babies went to jail during the year and came back with “ankle jewelry.” One of my students got a girl pregnant. There was a riot.

I wonder if that had anything to do with graduation rate? Hmmmmm.

My students were fiercely loyal. Yes, they misbehaved and gave me headaches and made me want to scream. But if someone threatened me or my classroom, that someone didn’t do so again. The girls wanted to be in my wedding when I announced that Eric had proposed to me at Christmas. When I had to leave the school because we were moving to Michigan, they did this to my whiteboard:

Nala was quiet and sweet and stuck in my 8th period class. 8th period was the last period of the day, and as a new teacher, I struggled most with that group. I wanted so badly to do right by her, though, since I saw so much of myself in the budding writer.

When I left, I gave her all of my contact information and told her to stay in touch – let me know what was going on in her life. And she has. Last month, I got an email telling me that she was accepted into Hendrix College. I was relieved. I was proud. I cried.

I wake up at night, thinking of lesson plans that I should have done, ways that I could have served my students better.

No matter what I do moving forward in my life, I will carry this burden of feeling that I failed. I failed them. At least most of them. I wasn’t rigorous enough, hard enough, thorough enough, demanding enough…good enough. They deserved so much better.

Pine Bluff’s graduation rate is currently 56%. That means that approximately 72 of my kiddo’s are graduating today. I am immensely happy for that.

It’s easy for me to feel guilty, to blame myself, to be miserable.

But today…today I’m going to be proud, and I hope that all of them know that.

Published by Polymath @ The Safin Hold

Hi. I live in Michigan, but I'm from Georgia, Pennsylvania, Seattle, and Arkansas (no, not an Army brat). I live with my husband and our cats, Cirilla and Dandelion. I'm a bonafide Salesforce Admin & Marketo Certified Expert. I like to craft. I like to cook. I like to eat and drink. I like to laugh. I like comic books and video games and sci-fi. I like a whole lot of things, and chances are, I will like you! I've also been a lot of things, like a 9-1-1 dispatcher, a teacher, and for a while I wrote obituaries. Right now I am a Salesforce Consultant! Who knew? Friends? View more posts

3 thoughts on “Show Your Pride”